The Irish Times lead editorial today about the aftermath of the recent papal visit.

“Pope Francis has returned to Rome after his brief visit to Ireland where he charmed with his humility and his plea for forgiveness over the sexual abuse of children by Catholic priests and its cover-up by bishops. Yet, nothing has changed.

As the afterglow of that visit recedes, a Vatican emerges once more where things are as was. There, inadequate mechanisms for holding to account those prelates who cover up the abuse of children remain. This is unacceptable”.

“If the Catholic Church does not address accountability in a manner which ensures children are safe, then the international community should intervene to help it do so”.

One way would be for the United Nations to cease its recognition of The Holy See (The Vatican) as a state with a seat at the UN. This anomaly in the world order begs the question why no seat at the UN for the other major religions of the world?

Full coverage of speeches made during the visit are here: https://www.irishtimes.com/news/social-affairs/religion-and-beliefs/papal-visit

Here is the text of the letter sent by Minister for Children and Youth Affairs, Katherine Zappone, to Pope Francis (as head of the Vatican) regarding the Tuam babies scandal.

As Minister for Children and Youth Affairs and an Independent Minister of the Government of Ireland I am writing to you in the hope that the church will accept its responsibilities and make reparation for its part in a very shameful chapter of Irish history.

Mother and Baby Homes came to public attention in Ireland during the summer of 2014 following a series of disturbing reports of high mortality rates and claims of possible burials of children on the grounds of a  former  home in Tuam Co. Galway.  The then Government decided to have these matters investigated and a statutory Commission of Investigation was established in February 2015.

The Commission has been examining a wide range of concerns related to the institutional care of unmarried mothers and their babies during the period 1922 to 1998.  The Commission is examining 14 Mother and Baby Homes and 4 County Homes.  It will in time provide a full account of what happened to vulnerable women and children in these institutions; how they came to be there; and the pathways they took as they left.

An early focus of the Commission’s work was to examine the Tuam site to address questions about the alleged internment of human remains. As part of this process, the Commission conducted a series of surveys and test excavations, commencing in October 2016.   I visited the site myself and met former residents and relatives shortly before these works commenced.

The statutory Commission of Investigation confirmed the presence of human remains on the site of the former Bon Secours Mother and Baby Home in Tuam.  The Home was run by the Bon Secours Sisters from 1925-1961 in what was previously a workhouse dating back to famine times. In the 1970’s the former home was demolished to make way for a local authority housing estate.  A small memorial garden is maintained by local residents and there is also a children’s playground on the site.

The Commission’s excavations have revealed that human remains are visible in a series of chambers that may have formed part of sewage treatment works for the Home.   The Commission believes that there are a significant number of children’s remains there. It recovered some juvenile remains for detailed forensic analysis.  From this analysis, it has determined that the remains are between 35 foetal weeks and 2 to 3 years of age. From carbon dating it has correlated the age of these samples with the time period during which the home was in operation – between 1925 and 1961.

This news was met with widespread disgust both in Ireland and abroad.   There were suspicions about burials of this kind in Tuam for some time..  However, it is fair to say that the confirmation received from the Commission of Investigation caused many people to demand that dignity and respect be afforded to the memory of the children who lived their short lives in this Home.  We also owe it to the families of these children to now do the right thing by their loved ones.

We have now put in place a series of actions to ensure that we have an appropriate and respectful response to the discovery.

Since then, I have instructed an expert team to do further work on the site to determine the options that are open to us to fulfil our duty to these children.  The team has reported offering options including a complete excavation of the site and DNA analysis of the hundreds of remains contained therein.

A consultation has also been carried out with survivors and local residents about what they would like to see happen on the site in Tuam.

There was little compassion shown to children and their mothers in this home.

We cannot change what happened to them. For the little ones whose remains are in a sewage system, we owe them dignity in death. For their mothers, siblings and families we need to give them some peace.

It is my strong conviction that given the role of the Church in this shameful chapter of recent Irish history it must play a practical role in addressing the hurt and damage.  I believe that the church should contribute substantially to the cost of whatever option is decided by the government.  This should be done willingly, unconditionally and quickly.  Nothing less will demonstrate remorse.

I look forward to receiving your response.

With every best wish, sincerely yours,

Here is a link to a YouTube video of the address by An Taoiseach, Dr. Leo Varadkar, to Pope Francis delivered on Saturday 25 August.

Here is the kernel of his address: 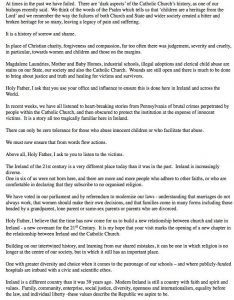 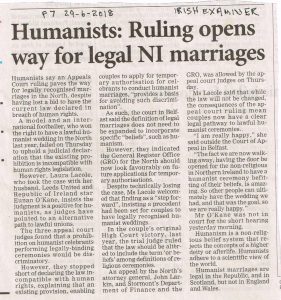 This is an article by Louise Neylon showing how marriage has changed in Ireland in recent years.

The changes have implications for education policy at primary level (National Schools) in the context of the patronage (ownership and control) of our schools in the near future. 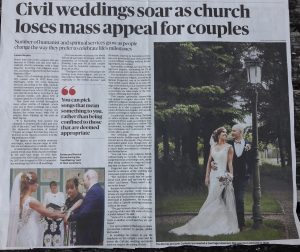 These three pages comprise a facsimile of the letter (October 1831) from Chief Secretary (Ireland), Edward Stanley, to the Duke of Leinster (senior Irish peer) to appoint him President of the Commissioners of National Education under instructions from the imperial government.

The Stanley Letter sets out the precepts for the National School system. 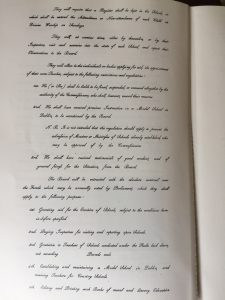 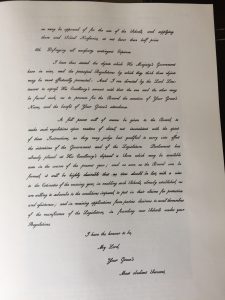 John Colgan (on Twitter @ColganJohn and Facebook) has compiled some interesting data about the changing nature of marriage in Ireland from Census 2016 and other databases via the Central Statistics Office.

Table #1. Roman Catholic Marriages as a % of All (Province by year)

In 2017 the proportion of all marriages solemnised outside a church context but registered in the State was 40.4% of the total. This has huge implications for the government’s National School divestment policy, which is proceeding at a glacial pace and won’t be sufficient to meet the latent demand for more secular classrooms right across the land, in just a few years time.

So far Minister Bruton has only managed to create 12 Community National Schools (CNS) during his term in office.

Once the 8,000, or so, secular couples (2017) start producing children eligible for Junior Infants admission (from 2021 onwards), the demand for their child’s Constitutional right under Article 44.2.4 not to receive religious instruction will only become more pressing.

This is the demographic time-bomb ticking away.

This is the text (as amended) of the Education (Admission to Schools) Bill, 2016.

However there are no penalties attaching to any patron body or board of management for failure to observe the provisions in the Bill.

Letter to Editor of The Irish Times from Paddy Monahan: 9 January 2018

Sir, – In your otherwise excellent editorial on the “baptism barrier” (January 5th), you state “many schools are flexible and inclusive”.

Some 96 per cent of taxpayer-funded primary schools in Ireland have a religious ethos and, as father to a three-year-old boy who happens to be unbaptised I have to ask, where are these flexible and inclusive schools? I have searched pretty hard and have yet to come across one (outside the 2 per cent of schools in the State run by Educate Together).

The Constitution sets out “the right of any child to attend a school receiving public money without attending religious instruction at that school”. Around 90 per cent of our primary schools are run by the Catholic Church, and in virtually all of them children not of the Catholic religion are sent to the back of the class for 30 minutes of mindless busy work every day while the rest of the class receives faith formation. This segregates and stigmatises children as “other” on a daily basis throughout their childhood while also breaching a clear constitutional right as such children absorb every word of the lesson being taught – not exactly inclusiveness. Catholic patrons appear deaf to the simple and expedient solution of moving faith-formation lessons outside the school day.

If, when it stated many schools “are flexible and inclusive”, the editorial meant “will enrol children of any religious background”, then I am afraid this is simply factually wrong. Almost every school in this country prioritises four-year-old and five-year-old children in enrolment on the basis of their religion.

We must be wary of mistaking an undersubscribed school that is obliged by law to take any child, but will rigidly apply its discriminatory enrolment policy as soon as it is fully subscribed, for a school that does not have such a policy in the first place. The mere existence of a discriminatory enrolment policy at the local school places years of stress and anxiety on parents of children of no religion or of a minority faith as to whether they will be lucky enough to get a place when the time comes. It also, of course, encourages baptisms of convenience; Catholic parents are safe in the knowledge that their children will always be in the top enrolment category.

To be clear, in my experience Catholic primary schools are neither flexible nor inclusive. If there is an example of a Catholic school anywhere in the country that does not operate a Catholics first enrolment policy and does not segregate children on the basis of religion, I’d love to hear of it. – Yours, etc,

In a short statement issued last night Dick Spicer and son, Norman, point out there may be some issues of governance still to be resolved re the NMH and Vincents but our legal case has achieved all it could within the parameters of the Constitution, and these are substantial gains indeed.
The grounds on which our claim was drafted were the constitutional clauses dealing with endowment of religion and protection of the family.
The Sisters in removing themselves from involvement have brought matter into compliance with the ban on endowment, and the removal of canon law restrictions on medical practice in both hospitals has removed that conflict with the medical rights of the family.
Both of our grounds for legal action  therefore no longer exist, the aims of the action having been achieved we are happy not to have to proceed further.
Funds raised (a little over €1,000) have covered our costs to date and any left over after settlement will, as stated, be shortly donated to the Children’s Hospital. Thanks to all.
Dick & Norman