Prof. Diarmuid Ferriter wrote this in The Irish Independent on 30 March last.

The so-called ‘baptism barrier’ to children getting a place in Catholic primary schools is “a dark stain on the national conscience that needs to be removed”, according to Professor Diarmuid Ferriter.

The UCD Professor of Modern History told the INTO conference that “unbaptised children and their parents are treated as second class citizens and that has to stop”.

Prof Ferriter, both of whose parents were long-standing activists in the INTO, traced key developments in Irish education since the 1916 era in the course of an hour-long address to the conference.

He spoke of the scale of “enlightenment” of the current system, such as the focus on well-being, learning communities and gender positive action. He said 100 years ago Padraig Pearse was preoccupied with the idea of the “charismatic teacher and a child-centred approach”.

Prof Ferriter said while there was a shift away from religious control of schools, “nevertheless we have a denominational system”.

He said parents had a constitutional right about the choice of school to which they sent their children, but then he cited legislation that allowed schools to protect their ethos and asked “in reality do the really have that right, do they really have that choice”?

The legislation to which Prof Ferriter referred is the Equal Status Acts, which prohibits discrimination across society on nine grounds, including religion, but religious-controlled schools were given a derogation which allows them to give priority children of their faith.

In practice this means that, in Catholic-run schools, which account for nine in 10 of the country’s primary schools, children who have been baptised get priority enrolment over children who are not baptised, but live closer to the school.

It puts many parents who do not necessarily want their children baptised in the Catholic faith into a situation where they feel forced to do so in order to secure a place in the local school.

Prof Ferriter described it as “another dark stain on the national conscience that needs to be removed if we are to have truly republican education system”.

He said the current system did not protect those of no faith, even though the Irish Republic was to have a toleration of all faiths and none. 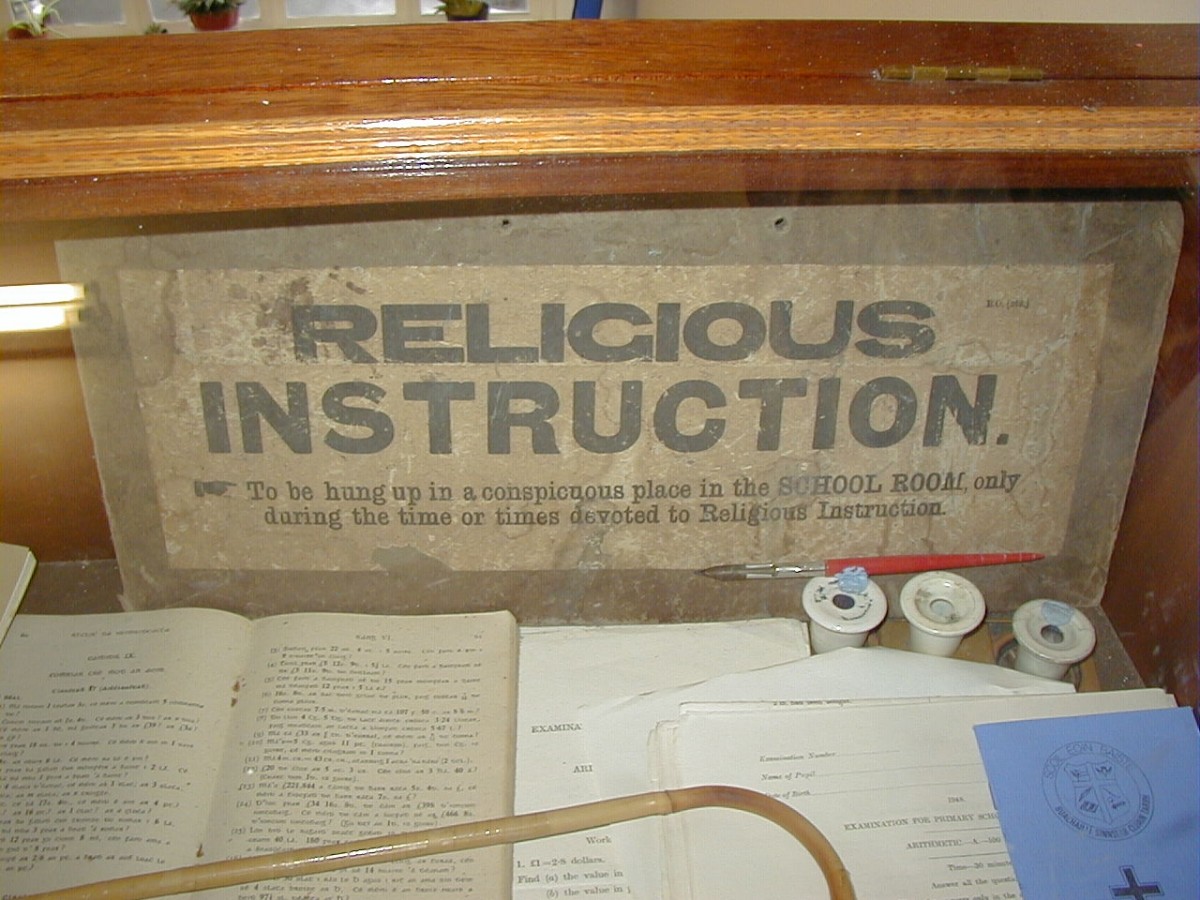 Irish National Schools’ Trust, Citizens to Separate Church and State and Equality in Education Alliance issued this press release today directed at the parties negotiating a Programme for Government.

It calls on them to resolve the two issues dividing some of our children from attending local National Schools.

Our press release issued this morning to coincide with the TCD SU hosted husting event in TCD at lunchtime refers to the Stanley Letter of 1831.

You can read a transcript of the original letter on the Department of Education & Skills web-site here: http://ow.ly/YgIEp

Here is one of the key precepts:

“They will require that the schools be kept open for a certain number of hours, on four or five days of the week, at the discretion of the Commissioners, for moral and literary education only; and that the remaining one or two days in the week be set apart for giving, separately; such religious education to the children as may be approved by the clergy of their respective persuasions.
They will also permit and encourage the clergy to give religious instruction to the children of their respective persuasions, either before or after the ordinary school hours, on the other days of the week”.
Article 44.2.4 of our constitution and the present Rules for National Schools #54 and 69 are supposed to give effect to this.

There has been much media coverage recently of the scandal of baptismal certificates being used as a religious test for admission of young children into our National Schools. The personal stories from affected families have been published in the national media. We know Nikki Murphy’s (son Ruben), Paddy Monahan’s (son Cormac) and Roopesh Kumar Panicker’s (daughter Eva), and more stories. Although Eva has now been admitted to a National School it is some 6 km away from the family home and being under Roman Catholic patronage there is no separation of the periods of religious instruction and faith-formation from the secular curriculum as required by Rule #54 (The Rules for National Schools, 1965).

Suddenly the new Irish like Roopesh Kumar Panicker are asking questions of Irish society it has been happy to brush under the carpet. People have been willing to have a child baptised to get them into certain schools. Suddenly there is a demand to stop these baptisms and find a more equitable way to address education in this country.

Of the election manifestos that have been published so far only the AAA/PBP grouping and Renua propose any meaningful reform.

Citizens to Separate Church & State (CSCS) and Irish National Schools Trust (INST) have joined forces to seek the following reforms in primary education from the political parties and groupings now that the General Election has been declared for 26 February.

The Constitution Review Group Report of 1996 (Chaired by Dr. K. Whittaker) called for the modest reform we seek:

“Yet it seems implicit in Article 44.2.4° that a school in receipt of public moneys cannot insist on a policy such as admitting only co-religionists as pupils, and the practice of an integrated curriculum would appear to be at variance with this guarantee.

This anachronistic and unconstitutional way of delivering education is likely on-course to cost the State €Ms in compensation claims that will arise in the near future when, for instance, some parent of a child in a school or adult, who was schooled in the primary school system, claims that he/she was subject to religious indoctrination in the classroom due to the fact that was impossible for the complainant child to prejudicially not receive the unwelcome material in the classroom. [Constitution Article 44.2.4] Unknown costs may await the State due to this unconstitutional proselytisation and breaches of the UN Convention on the Child. Also if Tusla can’t address the most basic needs of children what will happen if there is a need to pay out compensation?

Our solution is for the State to revisit the original National School system (Stanley Letter of 1831) so as to avoid the expense of building new schools to suit every faith/belief system in every corner of the land. The state cannot afford that solution finding it difficult already in providing the funding for a natural population increase in the school-going ages when it is strapped for revenue. Our solution eliminates inequality at a stroke and opens up every type of National School to local children irrespective of their faith or belief. Each one becomes a neighbourhood school as originally intended.

This is an exchange in the Dail on 8 March 1978 between Deputy John Horgan (Lab) and then Minister for Education, John Wilson (FF).

There is nothing new under the sun in relation to ongoing human rights concerns about Rule 69 application in our National Schools.

Boards of Management had been instigated in our schools in 1976.

I had been elected to my local board of management and arising from my experience I had formed, with others, the Council for Elected Parents’ Representatives (CEPR) on National School boards of management. In that role I met minister Wilson in 1978 to follow up on Deputy Horgan’s questioning of the minister.
Nothing has changed since that time and the present government is just as protective of church interests as every other government since then. Human rights abnegations don’t count despite UNHRC warnings to Ireland that this situation can’t continue to fester.

Who is advising the state to tough this one out?

asked the Minister for Education the regulations, if any, that are laid down by his Department to ensure that children attending national school may exercise their constitutional right not to attend denominational religious instruction.

The relevant provisions in the Rules for National Schools are as follows:

These Rules do not discriminate between schools under the management of different religious denominations nor may they be construed so as to affect prejudicially the right of any child to attend a national school without attending religious instruction at that school.

(1) The religious denomination of each pupil must be entered in the school register and roll-book. This information should be ascertained from the parent (the father, if possible) or the guardian of the pupil, where necessary.

(2) (a) No pupil shall receive, or be present at, any religious instruction of which his parents or guardian disapprove.

(b) The periods of formal religious instruction shall be fixed so as to facilitate the withdrawal of pupils to whom paragraph (a) of this section applies.

(4) Visitors may not be present during formal religious instruction unless with the express approval of the manager.

(5) The periods of formal religious instruction shall be indicated on the timetable.

I presume that the words “management committee” should be substituted for the word “manager” at the end of subparagraph (4) of Rule 69 above.

The board of management in the school has an obligation to see to it that the child is not required to stay there against the wishes of his parents or guardians.

If the board of management fail to make appropriate arrangements can the parent or parents in question communicate with the Minister in the matter and will the Minister do something about it?

They can and I will.

John Colgan has a Letter to Editor in today’s Irish Examiner about the ‘Rules for National Schools (1965)’.

The letter needs to be read in the context that these Rules are not a true statement of the current rules governing our National Schools as no codification has taken place since 1965.

The education minister’s mention of the “Rules for National Schools, 1965” as archaic on the cusp of a general election truly exemplifies the expression ‘kicking the can down the road’.

For while the rules have been in place for 50 years, they were, and remain, a detached, subversive piece of work, typical of the State’s biggest spending department, Education.

No act of parliament was made enabling them to extensively alter the preceding early 18th century legal arrangements.

They were never published as a statutory instrument under the Statutory Instruments Act, 1947, nor were they laid before the Oireachtas for the approval or amendment of the two Houses, which the 1947 Act required.

They were merely issued by the education minister of the day, Patrick Hillery. Parliament was sidelined by the department.

The back staircase in the department’s Marlborough St offices is called ‘Staighre na nEaspag’ — the bishops’ staircase — and clearly their hands are all over these rules.

Who else would put in the hands of a minister of a Republic words that religion is the most important subject in a school?

No minister and no secretary general has the competence to make such a judgment for society. Ever since, there’s been a slide away from the national school system as established in the 19th century. This system was approved by the then Catholic archbishops of Armagh and Dublin.

Then religious instruction and secular education were compartmentalised, allowing room for students of every faith and none to attend one school without being proselytised in the process.

Interweaving religion with secular subjects never had any place in the State’s vocational schools; no harm came of it.

The invention of the late 1980s, ‘religious ethos’ — which finds no mention in the Constitution — undermines pupils’ constitutional rights in publicly funded schools. The bishops have clout disproportionate to their negligible stake in our national schools.

The next governments needs to reclaim them.